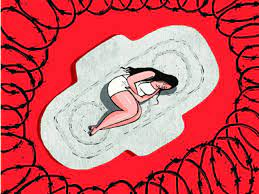 I think I must have been just short of thirteen ( may be younger), when I found a blood stain on my panties. It was a bit  puzzling. I had heard some of the girls in my class whispering about something like this. They used words like “menses” “period”. Since I was not part of what one would call “the cool gang” I did not understand. Using my naïve thinking, I convinced myself that since it was not hurting, it would stop . So I ignored the bleeding, washed my panties  and went about my day

However within a few hours, my mother was summoning me into the bedroom. She closed the door and held in her hand  my hastily washed panties where the blood stain was faded but still visible. She asked me to explain it.

I was terrified! I had nothing to explain because I myself did not understand it. One part of me was worried that I had done something terrible because my mother’s expression looked like I had and another part of me wondered how she had discovered it. She answered the later part herself. Apparently our domestic help had seen it on the clothesline and pointed it out to her.

I was still worried that I would get yelled at – and I  wasn’t sure for what.

Amma’s face was a mixture of  irritation and worry. She looked at me and sighed “ Why did it have to happen so soon”

I still did not understand what I could have done to disappoint her or worry her like this.

I had received no orientation from anyone about what to expect from puberty and menstruation. I still did not get an explanation from my mother. She just showed me how to use a sanitary napkin and told me that I could expect this to happen every month.

I guess I should have been thankful we did not belong to those communities from Southern India where a girl’s menarche is celebrated like a wedding- complete with invitation cards and guests. I think I would have died of shame had that been so. As it is , I was dealing with the bullying that south Indian kids living outside the south faced – being called “Madrasi” and having my dress, culture and customs laughed at.

But we did have a sort of ceremony at home- presided over by Mrs K -my mother’s Tam Brahm friend who we all hated. I was horrified that my mother had shared what I considered my “shame” with that woman. Mrs K had half a dozen under nourished daughters of which my contemporary had not yet started menstruating. She looked at my mother and said “ This is what happens when you feed your daughters too much. Haven’t I told you to feed them less?”

My mother looked suitably abashed. But she seemed to make up for it by introducing rituals like not allowing me access to certain parts of the house when I had my period, not allowing me to touch certain things and keeping my things separate during that time of the month.

To begin with I was puzzled. But I was told that I was “impure” and so this was necessary. My mother had also followed these things but by the time it was my turn, she had had a hysterectomy so it was just me who was being excluded from the mainstream of the house. Whenever I complained she told me “Consider yourself lucky. When we used to have our period, we had to stay in a shed at the back of our house. We could not use the front door and we had to enter and exit the house from the back”

It did not feel like I was fortunate because my life as a teen in Calcutta was so completely  different from  her adolescence  in Srirangam. What she had experienced was the norm. But in my case, it was an exception. No one I knew among my peers had anything like this happening to them when they got  their period

Things got worse when we visited Madras during the holidays. Every relative we visited gave me some money as gift for becoming “ a grown up”. I was shocked that all of them knew. But they treated it like it was normal.

When we visited my father’s ancestral village, I was made to wear a half saree. I hated the entire experience! I had never worn anything like that ever in my life. But to spend seventy two hours wearing that made me feel like I had entered hell.

Kids in the village asked me which college I studied in.  They couldn’t believe it when I said I was in the eighth standard! “But you look so big. You even have breasts!” mentioned a flat chested skinny girl who was apparently in the tenth standard.

I went back feeling like I was some kind of a freak. The feeling continued to stay. It was not until in my mid twenties that I came to terms with the fact that I was a well nourished girl who had attained puberty at the right age but who had not been prepared for it either mentally or emotionally. I also understood that menstruating did not make me “dirty” or “impure”. If anything, it made you ready for motherhood – the most exalted status in our social structure.

Breasts are a normal part of a woman’s anatomy. They are not obscene organs that need to be hidden. Yet girls are “slut shamed” for wearing clothes that fit tightly around their breasts or have low necklines.

Menstruation, puberty and growing up are stages where a girl builds her self image. As parents we should walk with them in this journey towards self discovery. We can hurt them terribly by transferring our anxiety and discomfort around puberty, sexuality to them. A lot about being an empowered woman is to be comfortable with your body. And that is something that only we as mothers can enable.

Let us not shame girls for being female. The problem is in our minds – not in their bodies.