Come May and the Indian Mom gets busy on social media. Her activities invite so much attention that every other issue gets sidelined. I am sort of feeling sorry for the new PM elect because  the ISC results came out on the 17th of May and every mom with a kid who wrote this exam was filling up her wall space with  her child’s mark sheet!! Come 21st and the ICSE results took over. If I were a member of the newly elected government or even a member of the party, I would be inclined to protest!!! Just imagine, some teens taking away the spot light from us!!! The CBSE results are pending and I just hope that they do not coincide with the swearing in ceremony. That would be disastrous!!

You say I am exaggerating?  If you think so then you are not acquainted with my breed. We Indian moms are probably the most competitive among the female homo sapiens species in this world!! We live and die to hear about how our children have done vis a vis others  in exams and in case they have come out in any way better we use every means available to broadcast it to the world.

Is it any wonder that we have taken so well to social media like face book?
I am just imagining what life was for us before face book. We had to be content with sharing the news with our neighbors , colleagues , relatives and other  mothers. Some of us who had mobility issues could not ensure that the news traveled beyond our neighborhood. But of course, there was always the problem with news that traveled like that. One could add or subtract marks ( depending on how well liked we were in that circle where the change was happening) and before you knew it your daughter who had a  80% aggregate could end up getting 60%. Of course some lucky ones could have enjoyed a reverse situation!

While examination marks dominate our psyche, we sometimes extend it slightly beyond that and talk about cups and shields won at sports events,  job offers, promotions, pay hikes etc.  We just like to ensure that everyone gets to know how brilliant our kids are! After all, isn’t it a mother’s duty to present her child in the best possible light? And of course we like to rub that in where our rivals are concerned. Some of us have developed it into a fine art!! We do not spare the off springs even when they are married. We ensure that everyone we know knows that they have been on a foreign holiday, that our son in law bought our daughter solitaires ( the quantitative fetish that some of us have makes us even mention the carat and cost of those stones!!! ) for their anniversary, that they have met some famous people etc !! With social media like face book it has  become the easiest thing to do. We “tag” all our friends in those photographs. After all isn’t all this a marker of our own success as a parent? 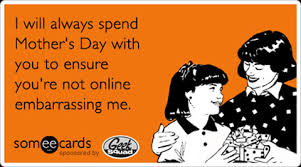 Such behavior often brings up an old grouse that I hold against my own mother. When my Xth exam results were out I remember her telling some neighbors ( and only those who asked ) – “ I think she has passed” !!! What did she mean “think” ?  I attempted to create a scene comparing her to my aunt from Bombay who used to fill the entire space in inland letters and post cards talking about her daughters’ achievements  including  in them even their performance in sports conducted by their building residents association and the number of love letters that they used to receive from boys in the neighborhood!!!  But Amma in this case probably was not like other Indian moms. She gave me a disgusted look and told me  “ Chee!! How can I boast about my own daughter like that”. So who was to talk about my achievements, I wondered? I was inclined to suggest that may be we should hire someone ( professional ad agency types)  to do that.  But she had her own solution “Others should speak about your achievements. We know how brilliant you both are. And anyway why should we tell anyone. What purpose will that serve?”

I wonder  what my mother would have to say if she sees all those posts on the facebook walls.  I think she might shudder with disgust. “Bad manners” Dad would murmur . Both of them , poor things are probably like extra terrestrials in our Indian mom’s world today.

And what am I going to do as the Indian mom of today? For starters, I am going to coax Mark Zuckerberg to develop some App ( for use atleast in India) where we can post our child’s mark sheets so that the numbers appear clearly. Or may be we can post links to the board’s site which on clicking would reveal all their glories at one go!! I wish there could be one site called “Glories galore” where we can keep a chronological account of our child’s achievements –complete with numbers, photographs  of arangetrams, sports achievements, foreign holidays, solitaires etc that we can regularly update and have it linked to our face book accounts. Mr. Zuckerberg better start working on “Glories Galore” before someone else filches  that idea.  I can assure him that GG would have more visitors than his FB !!!!